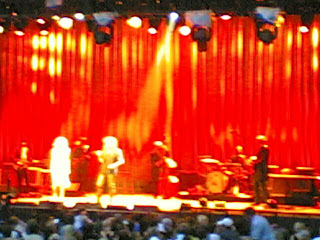 Not the greatest cell phone shot in the world, but my view of last night's Robert Plant/Alison Krauss/T-Bone Burnett concert at Chastain. After listening to their Raising Sand CD for all these months, I knew the show would be good, but it far exceeded my expectations.

I have been telling folks today that the show was a kind of history of rock'n'roll from Appalachia to present, with the middle being represented by Led Zepplelin tunes. There were plenty of Alison songs, songs from O Brother, Where Art Thou? soundtrack, T-Bone songs, Raising Sand songs, Robert Plant songs, and plenty of Zeppelin.

The band consisted of T-Bone Burnett on guitar, Stuart Duncan on violin, banjo, mandolin, autoharp, and guitar, Dennis Crouch on upright bass, and Jay Bellerose on drums and percussion, with the addition of Buddy Miller on guitar and pedal steel. Alison provided her stellar fiddle playing.

Standouts in my mind: The Battle of Evermore, with Alison singing the high parts and Robert singing the low parts. Alison singing Down In The River To Pray with Robert, Stuart, and Buddy singing the tight harmony vocals. And all the Raising Sand songs: Through The Morning, Through The Night, Trampled Rose, Please Read The Letter, Rich Woman, Gone Gone Gone (Done Moved On), Fortune Teller, Nothin', and Your Long Journey. All superb.

Clearly everyone was having fun on stage, and there was a great respect for each other and the music obviously being demonstrated. It was refreshing to watch Robert literally recede into the shadows to sing background harmonies on several songs where Alison was the focus. And Alison folded back into the band when her violin was supporting Robert's songs. Both of them even grabbed the beach ball being batted around the audience when it bounced on stage.

This was a show founded on the idea of perceived opposites actually being close together. Who could have predicted the outcome of mixing a Rock God with a Bluegrass Diva? Robert mentioned how the idea of their collaboration was one of "how will it work" and "what will we play". Alison wore a flowing white dress at the show and Robert wore what looked to be gun-metal grey leather pants and satin shirt. The band dressed in black and white. The electric guitars and the acoustic instruments melded together, the angelic voices intertwined, the understated presentation more powerful than perhaps a Led Zeppelin show.

I missed seeing Zep in my youth and had never seen Alison in person. This show confirmed my convictions that music is based on traditions that have become universal and genetic. What we do is reinterpret those traditions for the present, reinventing the wellspring of our souls. Music has always been my spiritial refuge and the Plant/Krauss show brilliantly showed the audience how the gospel of bluegrass and the fantasy of heavy metal are simply two sides of the same coin.

Posted by Synthejim at 8:52 PM