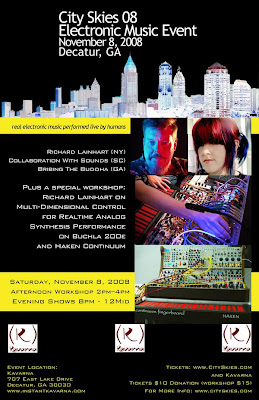 The next City Skies 08 event will be held on Saturday, November 8, 2008, with an afternoon Master class workshop with Richard Lainhart (Multi-Dimensional Control for Realtime Analog Synthesis Performance using Buchla 200e and Haken Continuum Fingerboard controller) from 2pm-4pm and performances starting at 8pm. We showcase the region's best electronic musicians at our favorite venue, Kavarna.

Confirmed performers on November 8 include Richard Lainhart (from New York), Collaboration with Sounds (from South Carolina), and Bribing The Buddha (from Atlanta). Shows kick off at 8pm.

The Richard Lainhart workshop for the November show promises to be quite amazing. Please tell your friends about it. Attendance will be limited:

The first electronic instruments intended for performance, such as the Theremin and the Ondes Martenot, while providing the performer with highly nuanced pitch control, had limited sound-shaping control and could only play one note at a time. The first modular analog synthesizers, while offering polyphony - the ability to play multiple notes simultaneously - and unlimited sonic control, had limited expressive performance control and were completely impractical for live use.

There have been many attempts since then to integrate the unlimited potential of modular analog synthesis with practical performance capabilities, and to provide the electronic music composer/performer with the kind of expressive musical control available in advanced acoustic instruments. Among of the most successful and creative of these efforts are the Buchla 200e analog modular synthesizer and the Haken Continuum Fingerboard.

Buchla's 200e is the first modular analog synth with patch memory and the ability to re-route patchcords on the fly, making it an ideal instrument for performance, capable of both the highest and lowest levels of control. The Continuum is a unique multidimensional controller keyboard that senses direct finger movement in three dimensions (X, Y, and pressure) for each of up to 16 fingers, making it one of the most advanced performance controllers available today. Together, the 200e and the Continuum make for an electronic music performance system of unparalleled expressivity and sensitivity.

In his workshop, Richard will demonstrate the synthesis and control functions of the Buchla 200e with an emphasis on patch programming for maximum expressivity under Continuum control. The workshop will include a live performance focusing on the Continuum/Buchla 200e system's expressive control capabilities. Time permitting, workshop attendees will also have the opportunity to play the system themselves.

Richard Lainhart is a composer, performer, and filmmaker based in New York. He studied composition and electronic music techniques with Joel Chadabe, a pioneer of electronic music and the designer of the Coordinated Electronic Music System (http://emfinstitute.emf.org/exhibits/cems.html and http://www.otownmedia.com/chadabe.jpg), at one time the largest integrated Moog synthesizer system in the world. From 1987-1990, Lainhart was the Technical Director for Intelligent Music, developers of innovative computer music software like M, Jam Factory, and UpBeat.

His compositions have been performed in the US, England, Sweden, Germany, Australia, and Japan. Recordings of his music have appeared on the Periodic Music, Vacant Lot, XI Records, ExOvo and Airglow Music labels and are distributed online via MusicZeit. As an active performer, Lainhart has appeared in public approximately 2000 times. Besides performing his own work, he has worked and performed with John Cage, David Tudor, Steve Reich, Philip Glass, Phill Niblock, David Berhman, and Jordan Rudess, among many others. He has composed over 100 electronic and acoustic works, and has been making music for forty years.

Lainhart's animations and short films have been shown in festivals in the US, Canada, Germany, and Korea, and online at ResFest, The New Venue, The Bitscreen, and Streaming Cinema 2.0. His film "A Haiku Setting" won awards in several categories at the 2002 International Festival of Cinema and Technology in Toronto. In 2008, he was awarded a Film & Media grant by the New York State Council on the Arts for "No Other Time", full-length intermedia performance designed for a large reverberant space, combining live analog electronics with four-channel playback, and high-definition computer-animated film projection.