In the course of my social networking today, I was shocked to run across the news that my boss and mentor from 30 years ago at CBS Records, Danny Yarbrough, had passed away in Savannah, GA, on November 3rd.

Danny was the branch manager at the CBS Records Dallas branch when I was a College Marketing Manager (college rep) and when I was promoted to Single Records Coordinator. We spent alot of time together visiting accounts, hanging with stars, and philosophizing on the state of the world. If there is anyone who could take credit for teaching me how to drink, it would be Danny.

When I was a college rep out in the hinterlands of Norman, Oklahoma, Danny made sure I got my fair share of recognition, promo bling, and exposure to the nuts and bolts of the record "bidness", as Danny would call it. When Pink Floyd toured The Wall and only played at two venues in the US (Nassau Coliseum and The Forum in LA), Danny got me two fantastic tickets and an airplane ticket to New York. When I graduated, he was instrumental in getting me the Single Records Coordinator gig. 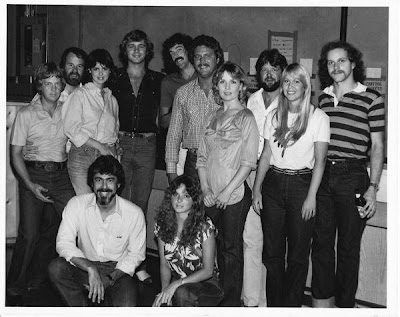 Danny is third from right in this photo and I'm on the right. We're backstage at a John Schneider concert.

Danny was a teenager at heart, a complex man, and the epitome of a real record person when that meant something, for better or worse. I'm sorry I missed his funeral.

Here is the obit.

Danny Yarbrough, 64, former head of Sony Music Distribution, died in his sleep Monday night (11/3), in Savannah, GA. Yarbrough was named president of that company in May 1994 and became chairman in 1998, replacing Paul Smith. Yarbrough joined CBS Records in 1965 as a sales representative in the company’s Southeast branch in Atlanta. In 1975, he was named field sales manager for the New York branch and a year later became branch manager. In 1979, he was appointed branch manager of the company’s Southwest office in Dallas and then moved back to New York in 1987 as VP of sales for Columbia Records. In 1989, he moved back into distribution in 1989 as SVP Sales and Distribution. After leaving Sony in 2003, he joined Musicland, staying there for a year, then became an industry consultant.
Posted by Synthejim at 10:46 AM