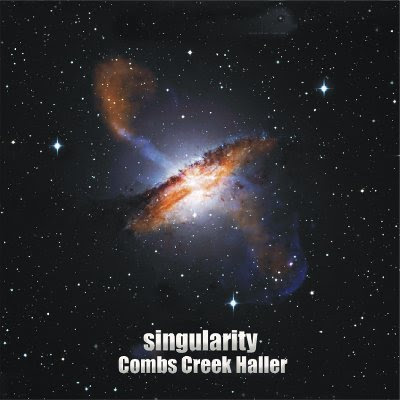 As we've written many times, one of the great pleasures of running a netlabel is to meet new artists and release their music. A related pleasure that is in many ways even cooler is to be able to release something for the first time by folks you already know and love. It is precisely that honor that we have today, with this majestic new release called Singularity.

This magnificent two-disc album was recorded live the evening of November 6 and into the morning of November 7, 2009. It so happened that Jez Creek, who calls Nottingham in the United Kingdom home, was visiting in the Atlanta, Georgia area as part of his USA tour, in order to perform at the City Skies electronic music concert on November 7. Kevin Haller, whose house Jez was staying at, was also performing at the same concert. And Jim Combs, being the organizer and founder of the concert series, was of course going to be performing as well. So just for fun, the three decided to do a live concert on StillStream.com the night before the big show. And the results were so good that they decided to release the recordings as this album.

Amazingly, given the quality of the pieces, the music was completely improvised. The musicians had never performed together as a group before this set and no preparations were done prior to the broadcast except for choosing keys and tempos. Somehow these three artists who had never played together at the same time, and had done almost nothing to prepare, immediately found a zone in which electronic ambient music of the highest order started pouring forth. Needless to say, the audience that night was blown away by the set, and we think that our listeners are going to be similarly impressed by what they hear in Singularity.

For indeed, this is some of the most beautiful live ambient music we have heard in quite awhile. Earth Mantra has long been a fan of all three of the artists' solo work, but we were dumbfounded by the synergy the three artists found so effortlessly as they sat down to play. Improvising live ambient music can be a challenging task, and to do it really well, with the right balance of patience and activity, is surprisingly hard. The fact that these three artists could hit such a bullseye, with zero preparation and without the benefit of knowing each other's live playing styles, is in our eyes nothing short of miraculous.

We could attempt to describe this music to you, but ultimately we would fail. Suffice it to say that it is beautiful, it is well constructed, very competently performed, and it just plain rocks. Better yet, why not download a copy of this album right now and give it a listen for yourself. We are certain that any fan of ambient music will be very happy they did.

Cool! Can't wait to check it out!