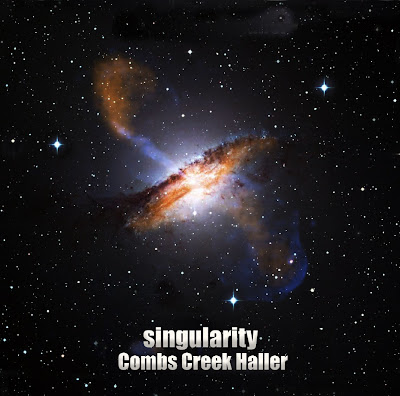 Chuck van Zyl, host of Star's End Ambient Radio, is featuring the new Combs Creek Haller CD Singularity on his radio show this weekend. He writes about the album in his weekly newsletter:

Combs Creek Haller form an uneasy unity. This trio has realized a mesmerizing and well-imagined work in THE SINGULARITY, a double album of improvised electronic jams. Reducing music to its most basic form they attempt pure contact with the universe. Broken down to its constituent elements, then reconstructed as sound collage, this Spacemusic engages the mind to the great mystery of the cosmos - a source larger than us all. Each of the two compositions spend their lengthy opening sections presenting a nearly atonal soundscape. Evoking a transcendent state of mind this ensemble breathes beautiful synth textures into space. A drone, over which the musicians are in constant dialogue, runs beneath swirling modulation effects and ascendant forms, and provides the impression of breaking through from the material world to interstellar space. Tones fold inward along a slow sweeping arc as resonant harmonic clouds expand and recede. Well into this void a sequence pattern rises and is joined by commanding lead lines and vaporous sustaining chords in minor keys. Ultimately listeners will contemplate this work as a record of a unique live performance - where three musicians have come together under a profound intuition. THE SINGULARITY is a statement so rich in sonic pleasures, its inevitable slight trips and slips are forgiven - and proves that it is better that musicians dare too much than too little.

and live on the web at http://xpn.org

Hypnagogue Reviews also provided a mini-review in their "Off The Grid" column:

Because I recieve so much music for review, I don't usually buy or download it. Now and then, though, I just can't help myself. I don't review what I get for myself, but I do write about it here, Off the Grid.

The thing you need to know going into the Combs Creek Haller offering, Singularity, is that it's a flat-out live improvised session between three artists who'd never really met and never rehearsed. Getting ready for a City Skies monthly showcase, Jim Combs (aka Sensitive Chaos), Jez Creek (Modulator ESP) and Kevin Haller (Burning Artist Sale(s)) decided to jam--and, thankfully, thought to record it. The upshot is that you get to listen to an astonishingly deep, very cool space-music journey that you will absolutely lose yourself in. And considering that it's free from Earth Mantra, it's worth your download time. (The file is 243 MB in size.) If I was reviewing this, it would easily be a Hypnagogue Highly Recommended work.

Posted by Synthejim at 9:14 AM