The Good Graces Open For The Indigo Girls

I'm reviving my blog. It's been dormant since after my last solo record, Sensitive Chaos Amerisynthecana, was released back in 2013. There is much musical activity going on right now, and I need a place to document it. I'll thank myself for it later.

Yes, there is a new Sensitive Chaos album in the works, with four songs mixed and ready, another handful of songs ready to be mixed, and two songs that need a few overdubs. More on that in a later post.

And yes, I've been having great fun performing out with several bands including the Good Graces, The Sunset District, and Blackfox. It is the Good Graces that is kicking me into action at the moment and will be the primary subject of this blog for the next month. 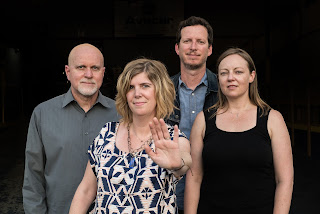 So, we (Kim Ware, John McNicholas, Tracy Clark, and I) are two weeks away from hitting the road, and I'll be attempting to document all the activity that is going into preparing for our tour. Not only the logistical, but also the emotional and the technical aspects I have personally been going through. There have been lots of all of this so far, and I'm sure they'll be lots more before we're done.